Myasthenia Gravis (MG) is not uniform in the way it affects people. Different people have difficulties with different muscle groups – severity may fluctuate, and reaction to treatment can vary as well. The course of the condition is variable, but in most cases progressive.

For this reason, the disease is very confusing to the undiagnosed myasthenic (and puzzling to the unsuspecting physician). At one time the myasthenic may function normally, and at another time experience severe loss of strength. Others may think that the myasthenic is lazy, or that they are suffering from a psychological problem. This can lead to frustration and emotional stress, which only exacerbates the condition.

There are many factors that can trigger episodes of weakness in myasthenics, including other illnesses (e.g. viral respiratory infections), drugs that affect the neuromuscular junction, hot weather, pregnancy, and emotional upset. The undiagnosed myasthenic might not connect the various symptoms to one condition. It should be noted that pregnancy can worsen, improve or have no effect on the condition – that is, a woman will not know how pregnancy will affect her condition until she is actually pregnant.

The symptoms of MG often consist of muscle fatigability with the myasthenic complaining of worsening of symptoms later in the day after their muscles have been fatigued or after being repetitively exercised.

Usually, weakness of the eye muscle is the first noticeable symptom. The disease may stay there, or it may progress to the rest of the body. The symptoms range from difficulty in eye motion resulting in double vision or droopy eyelids, to weakness and fatigability in the arms and legs. Other symptoms may include fatigue of throat muscles, resulting in swallowing difficulties and choking, fatigue of the muscles of speech, resulting in slurred and unintelligible speech, or difficulty in breathing.

Ocular myasthenia is when MG confines itself to the eye muscles. The impact of the condition on eye muscles include:

During a fatigue ocular episode, a myasthenic’s window of vision becomes restricted to the narrow slits between the droopy upper lids and the lower lid. For this reason, a number of myasthenics walk around with their noses in the air (when their neck muscles are strong enough to support their head)! Bright lights can aggravate the symptom.

In a minority of myasthenics (around 15%), MG is limited to ocular problems. But for most whose first symptoms are ocular, MG eventually moves onto other parts of the body within a couple of years.

Three different serial pictures to demonstrate fatigue of eyelid muscles as the patient keeps looking up.
After a few minutes of rest, the eyelids have returned to near-normal position. 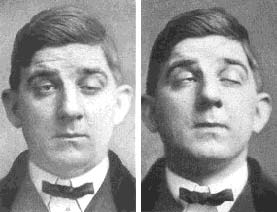 Posey & Spiller
Fatigue (Ptosis) in a patient with MG

Oral symptoms include difficulties with:

Muscle weakness in the pharynx (the section of the alimentary canal that extends from the mouth and nasal cavities to the larynx, where it becomes continuous with the esophagus) is another early sign of MG.

Swallowing difficulties are of particular concern as they can be dangerous. Myasthenics typically do well at the beginning of a meal but tire at the end, making swallowing too difficult. Some deteriorate to a point where there is total loss of ability to chew and swallow. At this point, food may stick in the throat, or food and drink may start to go the wrong way, for example into the windpipe, causing coughing and choking.

Foods which may trigger MG symptoms may be:

Foods which require a lot of chewing effort, such as tough meats or chewy sweets, could also tire out the myasthenic and cause difficulty in swallowing.

In situations where swallowing is too difficult, then the myasthenic may be advised not to eat or drink at all until symptoms improve. They will be alternatively fed in accordance with a dietician’s recommendation or be fed intravenously.

MG can affect one’s speech in a number of ways. Fatigue sets into muscles of:

One’s speech may sound nasal or slurred. And the weakness of the facial muscles results in the inability to even smile.

In a minority of myasthenics, the voice box may be affected resulting in an inability to talk at all.

MG also affects the ability to breath. Deterioration can be abrupt and may lead to the patient being put on a respirator. If breathing or coughing becomes insufficient, the patient is said to be in “crisis,” and mechanical breathing assistance in a hospital may be necessary.

In a myasthenic crisis, a respirator may be necessary for breathing.

A study found that of 175 myasthenics surveyed:

This is where many muscle groups are affected. The typical myasthenic may feel strong on awakening from a night’s rest or a nap, but experiences increasing muscle fatigue as the day progresses.

Within the first year after onset about half of the ocular myasthenics will go on to experience involvement of other muscles, and another 30% do so during the next two years.

Numbness, heaviness, muscular spasm, or loss of control of the limb can be experienced by the myasthenic. Limb weakness is often not symmetrical, with one side being weaker than the other. Shoulder weakness is demonstrated by trouble holding up an arm to comb or shampoo one’s hair, or to shave or put on makeup. The grip may become weak opening jars (and child-proof medicine bottles), hips may be weak getting out of deep chairs or the bathtub, and legs may tire climbing stairs or when walking distances.

MG is in itself painless, but the strain of supporting weak limbs or the neck can be painful.

Another symptom, which is not often mentioned in literature, but complained of by some mysthenics is a sense of loss of balance.

The problem with MG, particularly in the undiagnosed myasthenic, is that an episode can occur without warning and can make what is normally a non-threatening activity into a dangerous one. For example, a myasthenic can really injure themselves if there is sudden muscular weakness as they take a step and suddenly find themselves flat on the footpath! Even worse is the sudden muscular weakness whilst driving a car – sudden double vision, heavy eyelids, loss of control of the right leg, weakening arm muscles – all make a terrifying trip for the unsuspecting undiagnosed myasthenic.

Our December meeting is normally our Christmas lunch to be held at “The Social Kitchen” Ryde Eastwood Leagues Club. Please call 0242 832815 or email info@myasthenia.org.au if you wish to attend.

This will be confirmed at a later date.